Dreamer Hungarians – Stories from the literature of Debrecen 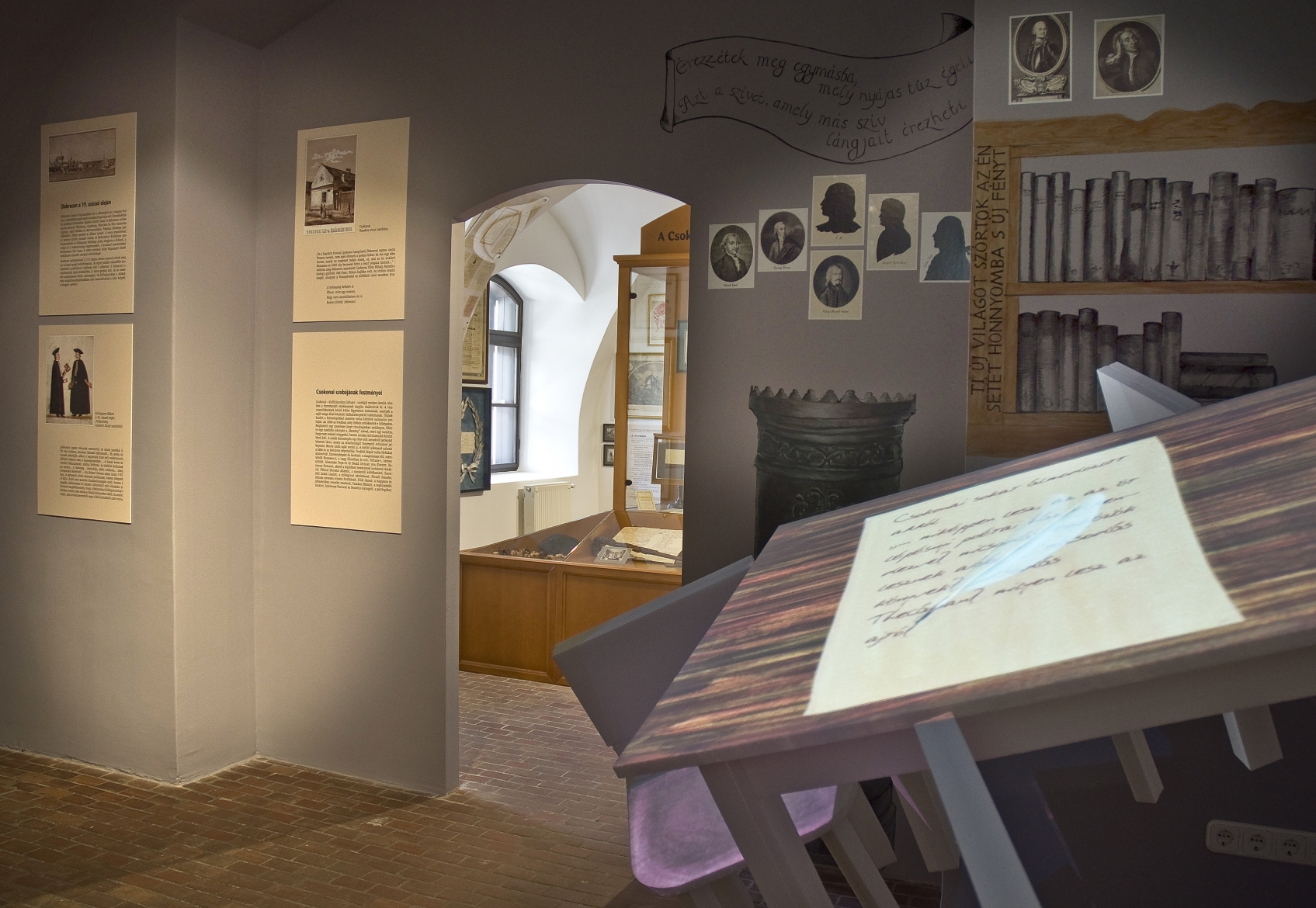 The new, permanent literary exhibition of the Déri Museum does not attempt to present the literary history of Debrecen, but to highlight some characteristic junctions that still have an impact today...

The new, permanent literary exhibition of the Déri Museum does not attempt to present the literary history of Debrecen, but to highlight some characteristic junctions that still have an impact today. It is on the one hand because we are unable to present the history of five hundred years through mere artefacts – as the replicas of manuscripts, documents and depictions would not tell more than what a book would – and, on the other hand, the audience would not be able to process all the information that accumulated over this long period.

Goals of the exhibition: to publicise the literary history of the city (cultural, educational goal), to recall life situations that promote socialization (familiarisation with the mental, and cultural historical characteristics of the history of Debrecen that still have an impact today), the harmonious and disharmonious perception of belonging to the city (to summon events that are thought-provoking, or cause joy and pride), experience transmission (exhibitions that build on and promote the active inclusion of visitors), the joy of knowledge (knowledge can be acquired by playing and having fun), new space-experience (the space is not a frame, but part of the exhibition installation), the proportional usage of the latest media (PC software).

The segments of the exhibition

Csokonai’s room: The fate of the emblematic figure of the poet allows the locals to see the collective public self that is conveyed by traditions, and allows other visitors to get to know the mentality of the city a little more. The room is built on the duality of everyday life and the poetic life, with a cabinet in its nucleus (according to tradition Csokonai retreated into the wardrobe when he wished to read or write). We step into the inner, poetic life of Csokonai through a cabinet. Furniture are floating, flowers bloom, birds sing, butterflies fly by, and a goose quill diligently writes in the projected virtual space… The faces of friends and idols appear around the imaginary fireplace. The painting, which, according to tradition and literary historian Ferenc Szilágy, was painted by Csokonai himself can be seen on one of the walls.

The exhibition of the Csokonai Circle: the circle was the first association in Debrecen which consciously strove to collect items, local historical and literary memorabilia that represent the history of the city. The City Museum opened in 1902 from the items they collected. The exhibition unit provides an opportunity to confront the fact that tradition is not given by itself, but created. The scenery invites for time travel and the room will be furnished as it was at the beginning of the 20th century.

Gábor Oláh room: In the 1910s the name of one of the most significant writers of Debrecen was mentioned together with Endre Ady’s. However, while the poetry of the latter truly contributed to the renewal of poetry and he is today a celebrated composer in the Hungarian literary canon, the former is much lesser known. Apart from a single short trip to Paris, he had never left the city, and since there was no other equally talented writer in Debrecen at the time, he was left without a benchmark and the chance for developing self-awareness. His conscience broke and he lived his life believed to be real in his imagination. The most substantial moral lesson of his fate is: the significance of common and individual self-awareness. The Gábr Oláh room provides an insight into a life enclosed in texts. The projector mounted on the ceiling casts words onto a half-sphere mirror, which scatters the words on the wall: from time to time these entwine or chaotically swirl around the visitor, or quietly fall as raindrops, and sometimes fall as softly as snow. Sounds of everyday life echo in the distance, yet these do not disturb the flow of words and letters.

Chamber of books: The hall is built of books. By paging through the books we can, in a playful and interactive way, get to know those writers who related to Debrecen in the 19th and 20th centuries. On the pages, visitors don’t get acquainted with dry biographical data, but with characteristic stories that happened in Debrecen. The passages end in an enigma, offering three possibilities. The topography of Debrecen and Hajdú-Bihar county is situated at the centre of the hall. Visitors may search the database in a variety of ways. The search result appears on a map.

Hall of spectacles: This exhibition unit presents the materials (manuscripts, books, and literary relics) of the literary collection as spectacles. The goal is to make people realise that these types of artefacts also deserve attention. This is due to the fact that many of the visitors are attracted by the sight (aesthetic value) at least as much as the information provided by the objects (documentary value).

Projection room: We placed a large format LCD screen in the narrow room, on which visitors can watch short films about Debrecen’s literature.

Rest area: At the end of the row of rooms visitors can talk about what they have seen, and those thoughts and feelings that the exhibitions have evoked in them. As a farewell they can use QR codes to play, recall experiences, and explore those pieces from the collection which were not displayed, while on the computers literary games can be played. The goal is, on the one hand, to make people realise that literature is not only a compulsory subject, but it can also be a game, and, on the other hand, to deepen and supplement the information and knowledge acquired at the exhibition.

Title: Dreamer Hungarians – Stories from the literature of Debrecen